It’s 9:30am on a Saturday, and all I wanted to do was sleep in. Little did I know that the online world had different plans for me.

I rolled over and looked at my emails. There were a bunch of notifications from google:

… and the list went on, about 15 total reviews all 1 star with some pretty bad things to say.

Of course, none of these people are in our customer database and the reviews left were all 1-2 sentences saying pretty nasty, yet generic things about us.

We looked at the profiles of these reviewers. A lot of them had a decent amount of reviews, however, you can tell this person was not living in Wisconsin (where most of our customer base is at this point). A lot of the reviews these people had (if their profile was displaying them) were from other countries. A majority of these profiles were recently created (within a few months).

Our star review ranking tanked from a 4.8 to a 4.2, and we are honestly worried that this attack isn’t over.

In the past, we have seen clients (and ourselves) get attacked by the occasional spam 1 star review, we have never seen this kind of attack before.

Are Fake Review Scammers behind this?

Doing further research, we discovered this is somewhat of a new kind of attack. Although we have not received a letter or message yet, we have suspicions that this is a kind of ransom attack where the scammer will ask for money to stop the attack. Search Engine Journal reported seeing this kind of attack back in July that went after restaurants primarily, but other industries have been targeted as well.

Google is aware of this issue and told people not to pay these scammers and to flag the reviews for removal.

I’m hoping in the future Google will develop an algorithm for this because this is extremely detrimental to businesses around the globe.

What we have done so far:

The first step for this kind of attack is to flag the reviews and call them to google’s attention for removal.

We did this by logging into our Google Business Profile account, looking at the reviews and selecting the three dots on the right-hand side of the review, and clicking “report review”. We selected “spam” as the reason for reporting.

From there, we received an email from google saying that they have received our request and are assessing this request.

We also responded to those reviews so prospective customers know these are spam reviews that we have reported to Google.

I’m hoping that’s all we need to do to remedy the situation, however, I will continue to update this blog with what we needed to do to get those removed.

As of right now, I’m not seeing any new reviews come in.

UPDATE: We noticed one of our clients received this kind of attack as well. We followed the same procedure as above.

I will re-visit this on Monday to see if the rest are removed.

Google removed some, but not all of the review spam in our client’s as well.

It’s Monday, and I was hoping to see all of the reviews removed, however, there were still 8 reviews that were not removed.

Worried that google rejected my requests, I found a way to see the status of the removal requests:

To view the status of your 1 star review requests, follow these instructions:

Right now, they are all pending for me. Hoping I get an approval for both of the accounts affected soon!!

Google had taken down all of our fake spam reviews (except 1 that was a 5 star but negative things to say about us) the night before, but this morning, I was lerted to another attack. This time about 12.

I went and reported these again to google…I’m awaiting the ransom letter.

At this point in time, I’m glad google is taking the reviews off, however, the star rating going down so quickly I think does affect what people think. I think one way google can combat this is if they see a bunch of negative stars at once, they delay the rating change for a few days while the Google Profile owner remedies the situation.

The dreaded denial of removal.

Google removed some of the reviews but not all, and rejected my request because the review was not found in violation of their policies. Luckily, I had screenshots of previous reviews, and this review was a duplicate of another one they already took down.

To appeal the decision:

Luckily, I was able to get those 2 denied requests appealed and they took the reviews off! I had a screenshot of a different profile saying the same exact review, so I think that was enough to convince them.

Today, as of 10:40am, all reviews have been removed on 1 profile, and 2 are still pending a decision on the other.

All reviews have been removed!

Its been 10 days and no other spam reviews have shown on either profiles. We have received legitimate reviews, so either the spammers decided we weren’t worth going after or Google is working on a fix for this!

If you have been working hard on your website, but you are disappointed in the results that you are seeing, then you may be overlooking some fundamental issues. Taking care of these issues will often help your website rise to the top of the rankings. Your Website is Not Mobile Friendly In a recent poll, […]

Google Local Services – What is It and How Do I Sign Up?

Google is constantly coming up with new ways to display search results (and make money of course). One of their newest products is called “Local Services” and is for service-based businesses only and is another way for your business to show up 1st on google and get more overall exposure. 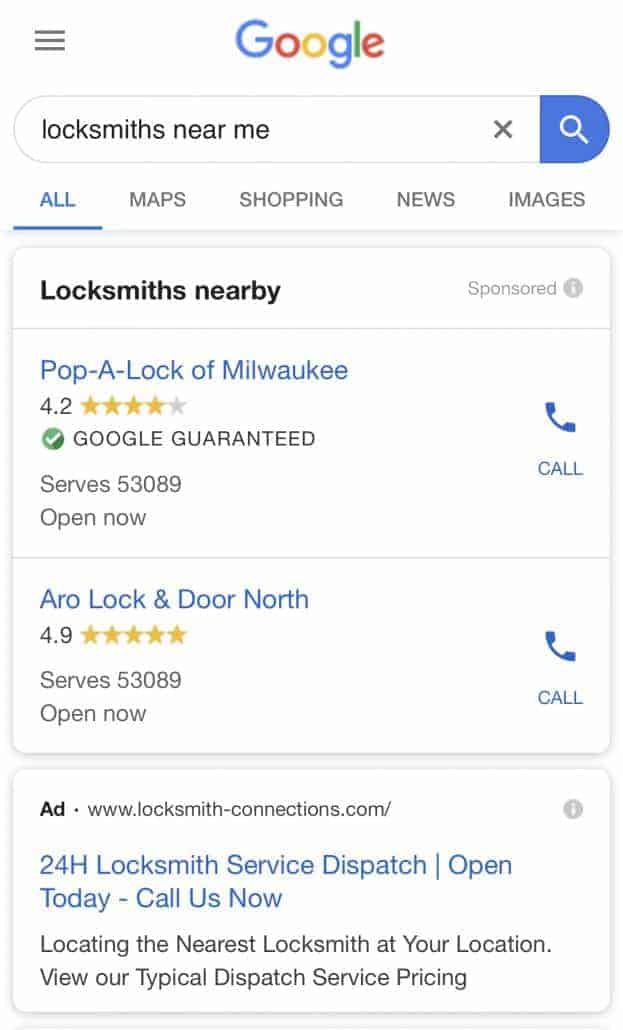 What is Google Local Services?

Google local services are ads that are catered to specific industries in the service sector such as plumbing, locksmiths, HVAC services, electricians & more. These ads show up towards the top of google searches and display your business, ratings & a link to call your service.

Once the searcher clicks on one of these listings, google asks the user to confirm the job they are looking for and where they are located. If your business fits the job description and the service area, the searcher will be able to view your listing in detail before calling your business.

What makes this service unique is that you pay per qualified lead instead of per click. This unique google product is slowly being released across the U.S. and we are starting to see these pop up in the Milwaukee area. Google also gives you the opportunity to dispute a charge if the lead is a spam lead.

Not only do you pay per lead, but there are no large lists of keywords to manage or A/B testing ad formats. This makes management easy, and if you have a PPC company managing these, much more affordable than traditional CPC ads.

Google Local Services show on both desktop and mobile devices.

Why Should You Sign Up For Google Local Services in Milwaukee?

Right now, there are not many businesses in Milwaukee using this – the less competition, the more likely you will grab a large portion of the leads looking for this service. We can’t guarantee this, but if you are one of a few businesses in your industry advertising, you may not even need to pay per lead because there are no paid ads ahead of you!!

If you are in the following industries, you can take advantage of these services in the Milwaukee Area:

Not utilizing Google Local Services, and don’t know where to start? We can Help!

After signing up for their service and being approved by Google, you will set a weekly budget and are charged on a per lead basis. The lead cost is set based on the industry your business is in which will vary based on the category and market. Typically, you’ll see leads costing you from $5-$140 per lead.

Don’t want to pay per lead? This is possible! You can list your business for free with google local services, however, your listing will likely not show at the top of results – they show up below the paid ads and are not displayed as “Google Guaranteed”.

What is “Google Guaranteed”? Upon sign up, Google will screen your business which typically includes license and insurance verification & employee background checks. Once you are approved, you get a green check mark next to your listing saying you’re “Google  Guaranteed”- the ultimate Google stamp of approval. Along with this “Google Guaranteed” stamp, if a customer is not satisfied with work quality, google may refund up to the amount paid for jobs booked through Local Service Ads. Google puts a lifetime cap of $2,000 for this coverage. You can read more about the Google Guarantee HERE

This Sounds Amazing! How Do I Get Started With Google Local Services?

You will fill out a form and google will let you know if the service you provide is currently available in the area you are located. If it is, you will then be able to estimate your spend to give you an idea for a weekly budget.

From there,  you create your listing and Local Services Profile.

After that, you will then be asked to provide license and insurance details.

In order to be “Google Guaranteed,” you will need to pass the background checks and have your license and insurance details verified.

If you need help signing up, we offer management services! Contact Us to learn more!