On Tuesday, June 27th, a new malware cyber attack called Petya was launched across the world. Another malware called GoldenEye was thought to be responsible, but was discovered to be a different malware that’s similar to Petya, having borrowed Petya code.

The Petya virus is mostly a concern for businesses, big and small, especially if a business uses Microsoft Windows/Windows PCs. It spreads from computer to computer by taking advantage of the EternalBlue exploit, and was said to have started from a Word document attachment. PowerShell Scripts might have also been used to generate the attacks.

Within the first couple days of its release, the Petya cyber attack affected multiple countries and infrastructures, such as Merck in the US and Chernobyl in Ukraine. It has also affected Germany and Norway.

This malware attack is considered particularly dangerous compared to other attacks, due to its elevated level of aggressiveness. It is also similar to the WannaCry attack in its speed and number of infections, and that it uses WannaCry’s self-propagating feature on top of its own layers of encryption.

To read more about how you can protect yourself and/or your business from malware attacks, click here.

Gmail is Down for Many Businesses

This is NOT a drill! Gmail, an email app used by nearly 60% of businesses in the US, has experienced an outage this morning. Many businesses opened with in-accessible email – including us!

Below is what we got when trying to access gmail from chrome: 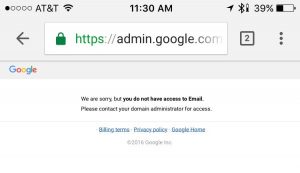 It looks like google is aware, and swamped with calls as their support and chat are unavailable at the moment. 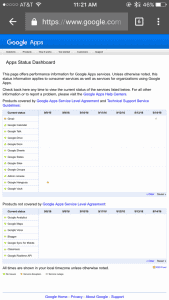 A potential work around (posted by google)

Hi Jack, switch Gmail off and back on https://t.co/eytUgwYc8W, allow it a few minutes to work and let us know how it goes. -LH